A day back in history – Sir Thomas Lipton 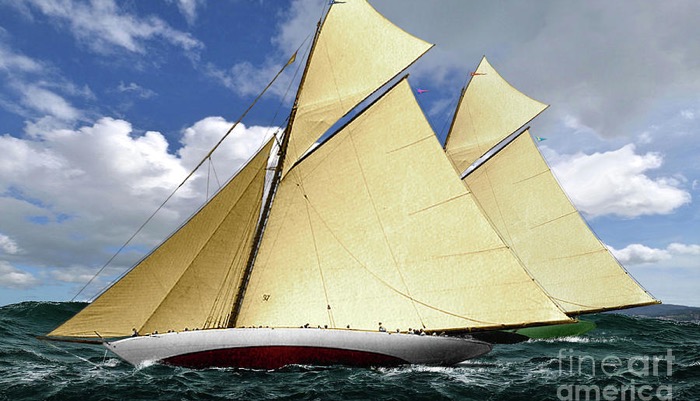 A day back in history – Sir Thomas Lipton

A scene from the America’s Cup 1920, postponed from 1914 owing to the outbreak of World War 1. Racing in New York Harbour over a 30 mile windward-leeward course, the defending club’s 32m sloop Resolute leads Sir Thomas Lipton on Shamrock IV.
Sir Thomas won the first race – his first ever race win in four challenges for the Cup – after Resolute’s main halyard shackle failed and she finished under jib only. He famously declined to celebrate this fortuitous victory, but went out and won the next race fair and square. Sadly for this great sportsman the remaining three races were all held in lighter conditions, in which he was unable to match the defender. Resolute took the series 3-2, and the Cup went back to its cabinet in the NY Yacht Club. It remained there for the next 63 years, by which time this club had fought off 24 challengers without loss, winning 74 of the 84 races sailed.
Finally in 1983 Australia II, skippered by Olympic Finn bronze medalist John Bertrand, wrested to Cup from the Americans. The new era had dawned.
Tags:
Share this Story
Related Posts
Lipton 2020 Postponed
Breaking News: Langebaan Yacht Club – “Challengers of Record”
Breaking News : Dates & Venue Announced from Lipton 2020

Error: (#10) This endpoint requires the 'manage_pages' or 'pages_read_engagement' permission or the 'Page Public Content Access' feature. Refer to https://developers.facebook.com/docs/apps/review/login-permissions#manage-pages and https://developers.facebook.com/docs/apps/review/feature#reference-PAGES_ACCESS for details.
Type: OAuthException
Code: 10
Please refer to our Error Message Reference.